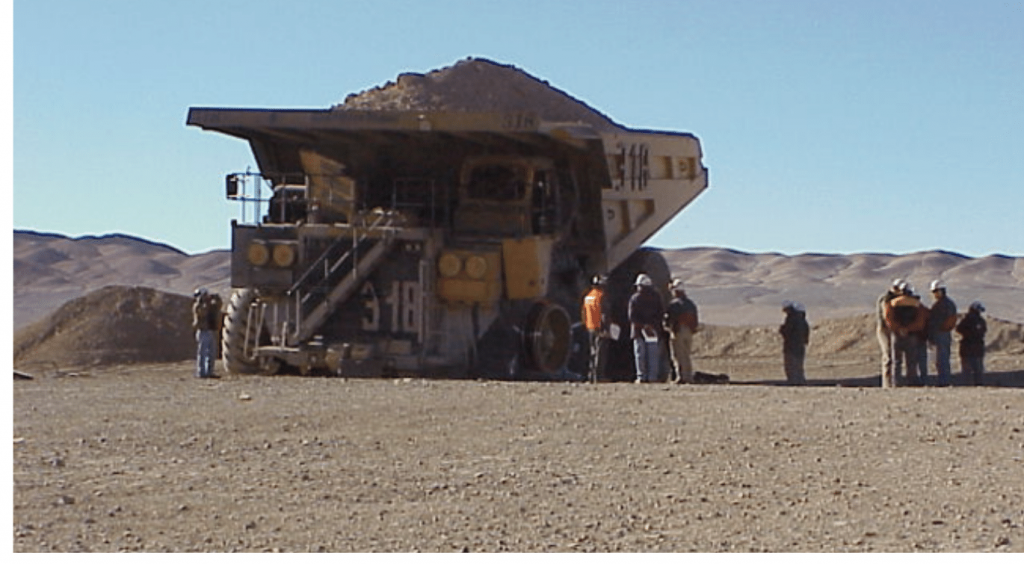 There is much misinformation concerning earthmover/OTR tyre explosions. Some of this has the potential to lead to a fatality.

We are talking here about tyre explosions – not tyre bursts (also referred to as impact or blowout). They are two distinctly different categories of tyre catastrophic failure although this is often not recognised within the industry; a tyre burst is often referred to as an explosion: it isn’t.

A tyre burst/impact/blowout happens when the damaged casing of a tyre can no longer contain the tyre’s operating inflation pressure, typically 100–130psi and never more than 150psi.

A tyre explosion happens when a mixture of volatile gases that has built-up inside the tyre’s inflation chamber auto-ignites and explodes – generally at a pressure exceeding 1,000psi. A tyre explosion is many orders of magnitude more dangerous than a tyre burst.

Firstly we should consider what the most common events are that can lead to an earthmover tyre explosion. They are presented below, listed in approximate order of frequency based on known events on mine sites worldwide over the past 30 years:

Note however that in the USA the application of heat to a rim mounted with a tyre is by far the major cause of mine site tyre explosions (and tyre explosion related fatalities).

We should also look at the types of vehicle/equipment most commonly associated with earthmover tyre explosions. Unsurprisingly, haul trucks are involved in earthmover tyre explosions more than any type of equipment. There are more haul trucks on a minesite than other categories of rubber-tyred earthmoving equipment (e.g. loader, dozer, grader, scraper). Haul trucks carry payload, tend to be bigger and travel further and faster than other equipment which increases the potential of tyre explosion. The one category of explosion not over-represented by haul trucks is the application of heat to a rim component or fastener – which is usually associated with smaller equipment such as boggers, small loaders and the like.

It is not widely recognised that there are two known tyre explosion mechanisms:

One often hears the term ‘pyrolysis event’ used as a synonym for tyre explosion. The vast majority of tyre explosions are initiated by heat decomposition of the tyre’s rubber inner liner, which seals the tyre inflation chamber, generating volatile gases which auto-ignite. However one explosion – which resulted in a fatality – was caused by a different process – the diffusion and subsequent auto-ignition of methanol from packing wood left in the tyre’s inflation chamber when it was mounted onto a rim.

The term ‘pyrolysis’ is really a misnomer in relation to tyre explosions. Pyrolysis means the thermochemical decomposition of organic material at elevated temperatures in the absence of oxygen (or any halogen). An explosion cannot occur without oxygen, e.g. in a pyrolysis-type environment. The correct categorisation should be ‘heat decomposition’ or similar. In any event the description ‘pyrolysis’ has entered the mining industry’s lexicon as the main cause of tyre explosions.

While the matters discussed above about pyrolysis, diffusion, burst and explosion are common misconceptions, they are misunderstandings that are unlikely, by themselves, to lead to a fatality.

There are, however, far more dangerous misconceptions that could – and in some instances have – resulted in death or life-threatening injury (to more than one person in several individual incidents). These misconceptions relate to:

Each of these is discussed below.

a.   Is it safe to heat a rim if the tyre mounted on it is deflated?

Application of heat to a rim fitted with a tyre does not require – as a prerequisite for an explosion – the tyre to be inflated, or even for the tyre beads to be seated on the rim.

A tyre explosion does not occur because inflation air within the tyre’s inflation chamber heats up and increases in pressure to the point that the tyre ‘explodes’. It occurs due to the auto-ignition of a volatile gas mixture that has built-up within the tyre’s inflation chamber – generating an instantaneous pressure shock wave typically exceeding 1,000psi together with a flame front and resultant explosion.

The majority of the tyre explosions caused by the application of heat to a rim or rim fastener have occurred outside of Australia; only one associated fatality has occurred on an Australian mine site since 1980, and that was in 1981. There appears to be far greater awareness on Australian mine sites than elsewhere of the dangers associated with this activity including the requirement to remove the tyre before applying heat rather than to just deflate it.1

(1) It is still common in North America to see commentary, related to a rim-heating tyre explosion, that the tyre had not been deflated – implying that this would have avoided the explosion.

b.  Does nitrogen inflation guarantee prevention of tyre explosion?

The oxygen level in a tyre’s inflation chamber must be less than 5% by volume2 to ensure that auto-ignition of any volatile gas mixture within the chamber cannot occur.

(2) An oxygen level of 5% by volume is the threshold safe level adopted by CASA and FAA – the Australian and American aviation authorities, respectively.

Nitrogen fill, even when almost pure (99.99%) nitrogen is used, always leaves some oxygen in the tyre inflation chamber. The amount of oxygen remaining depends on the purity of the nitrogen source, the pressure to which the tyre has been inflated, and whether the inflation involved one or more purging/reinflation stages.

Liquid nitrogen and bottled nitrogen (delivered to the mine site) are typically of 99.99% purity. On-site production of nitrogen using a PSA generator typically produces 99% purity, while on-site production using a membrane style generator is generally designed to produce around 97% purity; however it can fall to a lower level of purity if correct operating and maintenance procedures are not strictly upheld.

If a newly mounted tyre is inflated with nitrogen of 97% purity, then it must be inflated to at least 118psi to ensure that the oxygen content within the tyre’s inflation chamber is less than 5% (and thereby virtually guaranteeing that an explosion cannot occur). If the nitrogen source is only 95% pure, then it will no longer be possible to achieve the 5% oxygen safety threshold within the tyre’s inflation chamber – irrespective of the pressure to which the tyre is inflated, or the number of subsequent purges and re-inflations undertaken.

Other potential causes of excessive oxygen levels within the tyre are the topping up of tyres with compressed air, e.g. in the pit, or in the event of unserviceability of the nitrogen inflation equipment.

Bougainville Copper in Papua New Guinea, one of the largest mines in the world in the 1980s, had several tyre explosions following the implementation of nitrogen inflation, one of which resulted in a fatality.

c.   Is it safe to remain in the cabin of a haul truck if there is risk of tyre explosion?

The position 1 (front left) tyre on a haul truck sits directly under the operator’s cabin. If this tyre explodes the air blast can be sufficient to force the cabin floor upwards, crushing the operator. In 2000, the driver of a 220mt haul truck at Radomiro Tomic mine in Chile was killed when the position one tyre exploded.

Even in the case of a haul truck contacting and pulling down overhead power lines onto itself, it is probably safer to (carefully) exit the cabin and sit midway across on the engine cover, under the body (tray) protective overhang, rather than staying in the cabin awaiting confirmation that the electricity has been cut.

d.  Is the risk of explosion averted once the heat source has been removed?

Tyre explosions are known to have occurred almost simultaneously with the initiating event, several minutes later or several hours after the heat or power source has been removed or the vehicle parked up and shut down.

The standard isolation period for a vehicle or tyre at risk of a tyre explosion event is 24 hours after removal or extinguishment of the heat or power source.

Tyre explosion events are similar to lightning strike events – we just do not know enough about them to take any life-threatening risks. It would be a brave (or foolish) person who regarded as safe a tyre or vehicle, affected by a potential tyre explosion event, prior to completion of the 24 hour isolation period.

e.   Can an infrared device safely determine whether it is safe to approach?

An infrared thermal imaging device measures the surface temperature of the object at which it is directed.

A tyre explosion always occurs within the tyre’s inflation chamber – usually involving a heat point, within the chamber, whose temperature exceeds 250C (in the case of pyrolysis explosions), but which can occur at normal tyre operating chamber temperature (for a diffusion explosion).

An earthmover tyre is an excellent thermal insulator. Infrared guns and imaging devices measure surface temperature i.e. of the external surface of the tyre (tread, shoulder, sidewall or bead) or of that section of the rim/wheel visible to the user. These surfaces cannot be safely relied upon to provide a real-time indication of what is happening within the tyre inflation chamber.

An infrared device should never be used to determine whether it is safe to approach a tyre during a potential tyre explosion event.

f.    Can TPMS be safely relied on to predict an impending tyre explosion?

Given that a tyre explosion always occurs within the tyre’s inflation chamber it may seem logical to assume that TPMS will detect the prelude to an impending explosion; this is a dangerous supposition.

While a pyrolysis explosion involves heat decomposition of the tyre’s inner liner rubber – typically at a temperature exceeding 200C – and auto-ignition of the explosive gas mixture such as styrene or butadiene at a temperature exceeding 400C, the pyrolysis is often limited to a small hot spot and a localised section of inner liner. It is entirely possible that the pyrolysis activity would not be reflected in the tyre inflation medium’s pressure and temperature (especially if the sensor was located 180 degrees opposite the zone of pyrolysis) – virtually up to the moment the gas mixture auto-ignites and explodes.

A diffusion explosion involves the release of methanol from wood left in the tyre’s inflation chamber; both the diffusion and auto-ignition of the methanol can occur at less than 65C – well within the inflation chamber temperature range for a normally operating earthmover tyre.

TPMS is incapable of detecting a diffusion event and cannot be safely relied upon to detect a pyrolysis event, above all if it is localised.

TPMS should never be used to determine whether it is safe to approach a tyre during a potential tyre explosion event.

We know enough about tyre explosions to generally avoid having one occur (except in cases of an act of god such as lightning strike).

However people still engage in risky behaviour because they have not been advised or are unaware of a risky activity, or believe that the risk of eschewing a standard operating procedure is worth taking, or make an unsafe assumption based of poor knowledge of the tools they are using or poor understanding of the mechanisms associated with tyre explosions.

If an incident occurs that exposes a tyre to a very real possibility of exploding, then quarantine the tyre or vehicle for a period of 24 hours with an exclusion zone to personnel of at least 200 metres (some companies stipulate 300 metres or more). It will be costly in terms of lost production (and the potential for equipment loss) but a fatality would be more costly – and not solely in monetary terms.

It is important to evaluate the risks before such an event occurs, decide on the controls and procedures to best manage these risks, and implement them.

The author is happy to further discuss any matters pertaining to in this bulletin. He can be contacted on:

No comments yet. Why don’t you start the discussion?